This is an update on my new suite.

I know that my new accommodation won’t be done overnight, it will take a few months, not weeks and I don’t think I will be in there until the end of April at the earliest. After the floor is laid it will be 10 weeks drying out and that’s when I can start doing the girlie things to it that will make it mine. However, it is looking less like a garage and more like a planned compact and bijou apartment, one might even call it a boutique boudoir.

On Sunday I planned the electrical requirements with my son-in-law Sean, who happens to be an electrician which is handy. I explained to him that I would need A LOT of sockets. One of the things that frustrates me living in the kitchen, which I do, is that kitchen appliances use up socket space. When my MacBook Pro, or iPad, or iPhone need charging, I’ve only got one spare socket and inconveniently, they all need charging at the same time! Therefore I need 4 sockets laid out on the worktop so that I can reach them. I have been quite demanding in specifying exactly what I need to aid my independence. On Monday, I directed the builder in what I needed in the shower – I was not in the shower with said builder, please do not read this the wrong way! I’m planning an electric shower unit, which needs to be fairly gentle for me; I don’t like needles. He also needed to know about spacing and turning room for my wheelchair. I have quite heated discussions with Husband in a hurry, trying to firmly point out that this is my room and I need to be heavily involved. We are taking a trip to Southend-On-Sea in order to buy my new bed, which seems an awfully long way, but HIAH wants us to go there so we’re going there. It’s a good idea for me to choose carefully the issues that will be the greater and a day out in Southend could be very pleasant.

On Wednesday Sean came to start his electrical work and the bricks were delivered, and taken back because they were the wrong shade. The bricks that were used to build my original house are no longer in production, it was 25 years ago and as a result we need to match as closely as possible or as Peter, my builder, has suggested, we make a feature of the wall to detract from the different shade. Subsequently, new bricks arrived and we can now progress on to the wall.

I was in the shower on Wednesday morning, when it crossed through my mind that the windows will be my exit in case of fire in the kitchen. I wanted to check that my windows would have a fanlight opening for ventilation. It transpired that it had not been planned and as the glass with leading had been produced this would be an extra cost. As it’s an important requirement for me I instructed Peter to go ahead with it and we can save money elsewhere. I’m very keen to have porcelain tiles in my bathroom and that was another discussion which was resolved favourably.

There is a discussion within that family as to whether disabled aids should disappear from the rest of the house now that I will be living downstairs. Should the stairlift be taken out, HIAH thinks it should not be removed but daughter 2 and son-in-law think it should go. There is a thought that I might use it in future to snuggle up with grandchildren when they stay, but they will always know that where I am the chocolate biscuits will be and they can come and stay in my new bedroom, indeed Meadow can’t wait!

This will take a while to complete and patience is something I am very good at. It has been a long time in the planning and will be over a year from the initial concept, which is something at the time I hadn’t quite understood, but it is going to be worth it in the end and I am in the process of planning a grand opening with much prosecco, gin and chocolate. 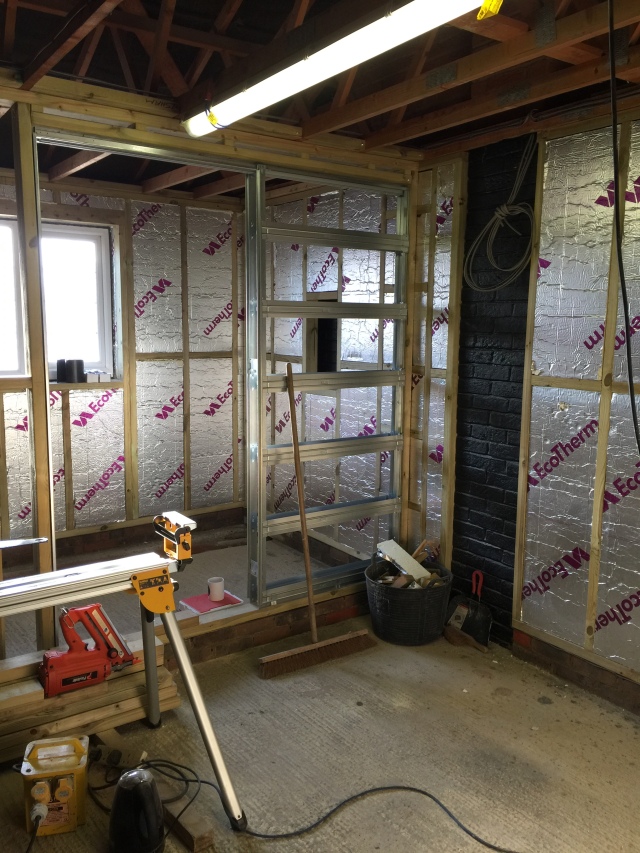 Come on, talk to me :) Cancel reply